Exploring Moss Gardens as a Play Space: Part One

Moss gardens bring nature inside. They offer children opportunities for imaginative play, experimentation, and hands on exploration of the world of plants.

We started by collecting moss and a mossy log in the forest. Then we placed a layer of soil on a boot tray and added the pieces of moss. At this point my eight year old helper took over and I realized that she could design the moss scape on her own.

The moss creation lived in a shady spot for awhile and then we moved it to a sunny window.  This spot has been too sunny for the moss, which has become brownish. Once the weather warms up, we’ll put it outside on a rainy day and the moss will green up. It’s a resilient plant. 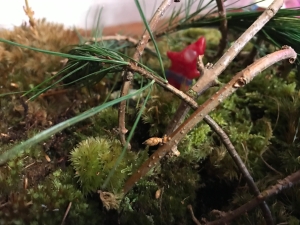 However, the sunny spot allowed for planting herbs and lettuce. Often moss gardens feature moss as the only type of plant, but why not include herbs and vegetables? I simply offered cuttings (sage, basil and lemon verbena) and lettuce seeds and the child took it from there.

Over time, beeswax figures were added as were some plastic figures. Stones, gems, pistachio shells, pine needles and egg shells find their way to the garden. Forsythia cuttings are bendable and were used to make the gnome house above. They were simply bent and stuck into the moss. 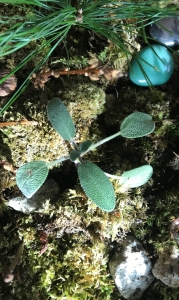 Often, moss gardens are meant to be primarily an object of beauty. I enjoy making that type of moss garden. But turning such a garden over to a child leads to less order and more creativity, less formal beauty and more experimentation.

Future posts will show how to create moss gardens, how to make beeswax figures and will show ways that such moss scapes can be used as an inspiration for play.

Here is a tour of a moss garden. Water experiments appear to be the order of the day.

← Announcing a New Facebook Page: Seeking Waldorf Wisdom with Kim Allsup
Our Kids Need to Picture a Future Where We Avert Climate Catastrophe →