Digging through the trash barrel, item by item by porch light, searching for the missing leg, I realized that a miserable, crying child can motivate a parent to do almost anything. A leg had had broken off my daughter Nora’s little figurine, a toy policeman carried from a foreign land by a big brother for the little sister who was now inconsolable because it had been dropped and broken and its leg could not be found. Anywhere.

Then, mid-trash barrel, a memory came to my mind. The now one-legged doll sparked a memory, an image of Joe, the husband of my childhood ballet teacher, with his crutches and his neatly rolled and pinned pants leg hanging loosely where his knee and lower leg had been before he had gone to war.

As a parent, my emotional first aid kit contained hugs, kisses, listening, distraction, walks in the woods and, evidently, searches through trash cans. And one more item that I had learned about but never tried, a healing story. I was a parent in a Waldorf school and had learned from the teachers there about the power of story to help children find their way in challenging times.

So I stopped looking for the lost leg and pulled Nora onto the sofa and  invented a healing story as I told it. Using my ballet teacher, Janet, and her husband as inspiration for my quickly created fiction, I hoped that, through a story, I could get Nora to not only accept the handicapped little doll, but to cherish him as he was.

In my story, a man, Joe, had come home from war without a leg and  was sad because he could no longer walk or run with ease. Then Joe went to the theater to see his old friend Janet, a dancer. He was so enchanted by her her grace that he imagined that he soared with her in every leap, joined in every twirl and that he held her hand gliding across the stage. 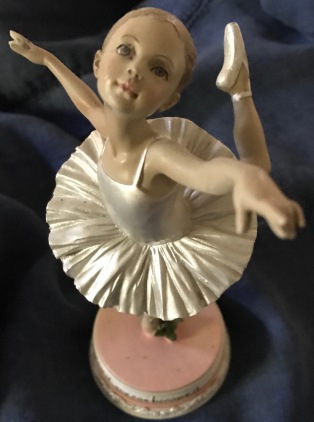 He started attending performances almost every day and visited her back stage. They fell in love and they married. Janet became a ballet teacher and they lived happily every after.

I added convincing details to the story and, as I told it, Nora stopped sobbing and began listening.I hoped that she was seeing that wholeness in in the heart transcends the wholeness of the body. I was learning that showing this in a story is far more effective than simply stating it as a principle.

At the end of the story I picked up the little figure and realized he would have a perfect home in Nora’s little jewelry box, the one with the twirling ballerina. She liked that idea, so she set Joe carefully in the box. The leg was never found and, because of the healing story,  was no longer missed.

This was the first time I ever told a healing story, but not the last. Such stories became part of my emotional first aid kit as a parent and then as a teacher and grandparent. I have used healing stories, also called pedagogical stories, to heal rifts between children, to boost self-esteem, to bring non-confrontational attention to behavioral issues and questionable choices. In class and at home, I usually tell ongoing stories about the same characters and can easily work in a tale in which someone lets go of a bad habit, finds courage or becomes more helpful. Sometimes I use fairy tales or fables that contain the message I need, but most often I create a special story that fits the situation.

Learn more about healing stories in my book, A Gift of Wonder, A True Story About School as it Could Be. Order here:

Do you want to stash healing stories in your emotional tool kit ? Here are some tips.